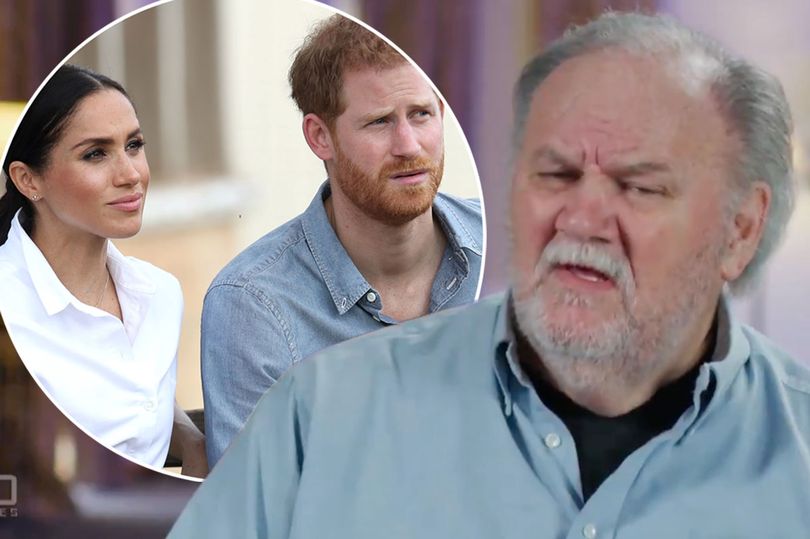 According to a relationship expert, Prince Harry and Meghan Markle will likely respond “aggressively” to her father’s court threat.

It was also suggested that Dad Thomas’ explosive promise to compel his estranged daughter and son-in-law to let him meet his grandkids may be the “final nail in the coffin” for their relationship.

The world has been privy to the former Hollywood lighting director’s contentious relationship with his daughter long before she married the Queen’s grandson.

Meghan’s estranged father, Thomas Markle, told Fox News that he will sue his daughter in order to see his two grandchildren.

Thomas Markle has yet to meet them because of his strained relationship with his ex-Royal daughter, whom he hasn’t seen since before her 2018 marriage to Harry, Duke of Sussex.

Thomas’ expectations for a reunion may have been heightened after Meghan and Harry relocated to the United States last year.

“I will be petitioning the California courts for the right to see my grandchildren in the very near future,” Markle, 77, told Fox News from his Rosarito, Mexico, home.

According to relationship expert Tina Wilson, his 39-year-old daughter, who is believed to be “furious” is unlikely to turn a blind eye to her father’s recent statements or resolve things discreetly.

“The Sussexes are likely to respond aggressively with legal paperwork back, if and when Mr Markle files his officially with the court of California,” she told The Sun Online.

“I am sure Meghan is furious with her dad’s latest interview and comments.”

Mr Markle also begged with the Queen to allow Lili to be baptized by the Church of England in the interview with Fox News.

The prince has never met his father-in-law, who withdrew from the royal wedding at the last minute owing to health concerns.

“Bringing the grandchildren into the public eye is stepping on sensitive ground, but not seeing his grandchildren must hurt a lot,” the expert added.

“One thing that father and daughter have in common is that neither is good at letting the dust settle, so this is likely not the last drama we’ve heard from them.”

“I fear for their relationship; this may well be the final nail in the coffin for any form of reconciliation.”

Relationship specialist Tina claimed Harry and Meghan “won’t appreciate him sticking his nose in and asking the Queen to accept Lilibet into the church through the media” amid a schism between the Sussexes and the rest of the royal family.

Meghan and Harry are rumored want to bring baby Lilibet back to the UK to be baptized in front of the Queen.

“Whilst the US is known for its crazy lawsuits, this feels more like a cry for attention rather than a legitimate ask and and his public plea feels like he’s clutching at straws, yet reconfirms that their relationship is still a stalemate,” Wilson said.

“Adding fuel to the fire after three years of them not talking, publicly feuding and the widely publicised court case, where Mr Markle shared a personal letter from Meghan, his latest comments and plans are not going to go in his favour.”

The Sussexes’ relationship with other senior royals has been tense since the pair revealed in January 2020 that they would be leaving their life as senior royals to go to the United States.

Meghan hasn’t met the queen since March 2020, when she completed her final royal duties.

Thomas Markle’s legal threat comes after Meghan and Harry had gone to court or threatened legal action on many occasions over various issues.