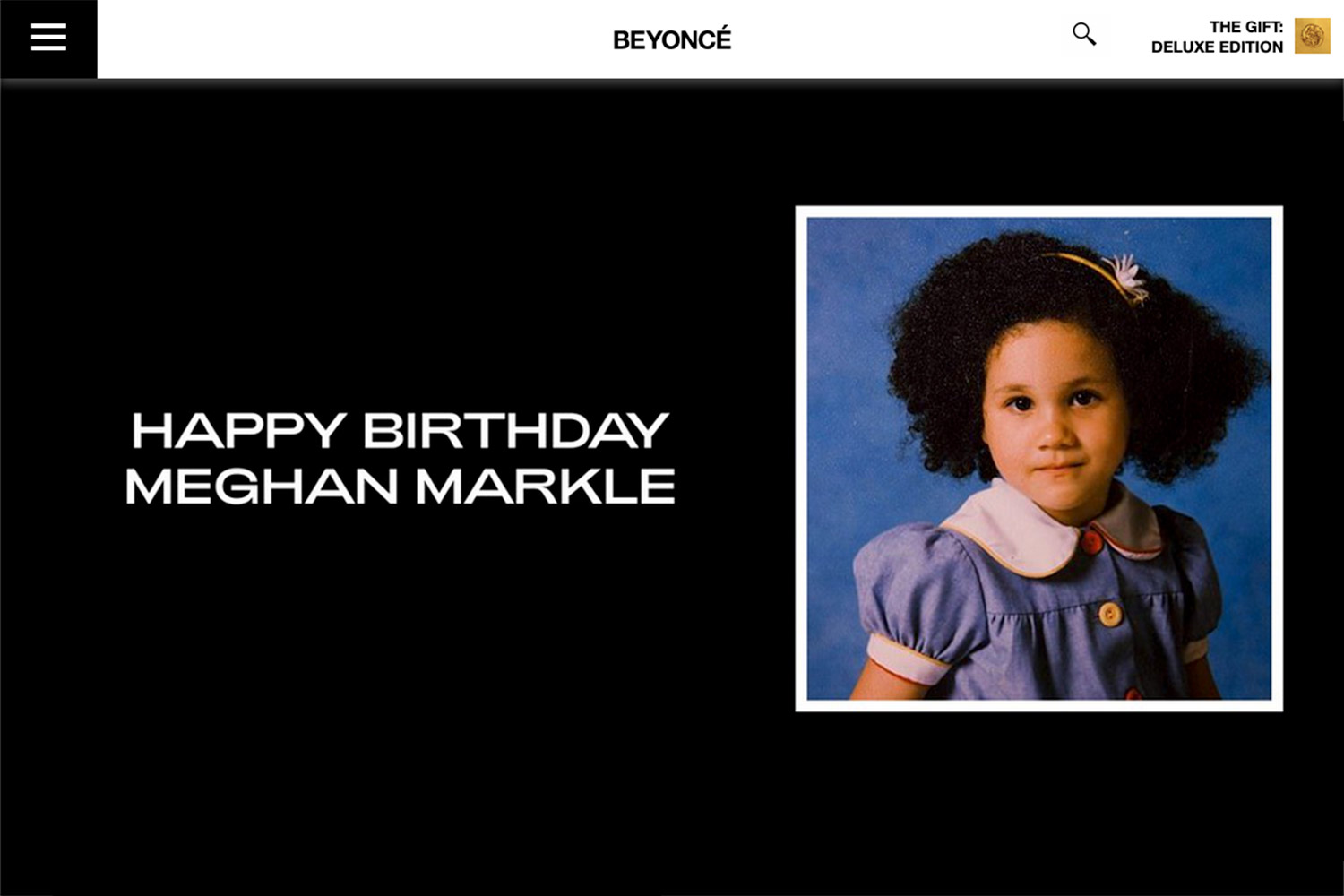 The Duchess of Sussex celebrated her 40th birthday on Wednesday, and while many individuals offered their best wishes, few will compare to those by Beyoncé.

Beyoncé turned to her website to give a beautiful homage to the Duchess of Sussex in honor of the occasion. “Happy Birthday Meghan Markle,” her greeting read across the screen, next to a childhood photo of the duchess wearing a blue puff-sleeved, button-up frock and a pink headband with a flower. Meghan’s birthday falls on the same day as former President Barack Obama’s and actor Michael Ealy’s, both of whom were also honored on the website.

If people visited to Beyoncé’s website’s homepage, they would see the image as the first item.

Beyoncé, 39, openly expressed her admiration for Meghan during her 2019 Brit Awards acceptance speech with husband JAY-Z. They collected their award for Best International Group via video message, replicating their music video for “APES—.” However, instead of sitting in front of Leonardo da Vinci’s “Mona Lisa,” they stood in front of a portrait of the Duchess of Sussex wearing a dazzling crown and pearl necklaces.

She subsequently shared an Instagram photo of herself sitting in front of the same Meghan photograph with Jay-Z. “Thank you to the Brits for the award for Best International Group. I won this award back in 2002 with my besties, Kelly and Michelle. How lucky am I to have been in a group with my other best friend, the GOAT Hova,” the singer wrote. “🙌🏾 In honor of Black History Month, we bow down to one of our Melanated Monas. Congrats on your pregnancy! We wish you so much joy .”

Earlier in the day, Meghan celebrated her 40th birthday with a humorous video starring Melissa McCarthy and a comical appearance from her husband, Prince Harry. During the video, Markle and McCarthy spoke about how she should spend her 40th birthday, with the actress coming up with ridiculous suggestions until the duchess formally launched the 40×40 project.

It’s not the first time Beyoncé has spoken out in favor of Meghan. Following the duchess’s shocking appearance with Oprah Winfrey in March, the artist posted a photo of theirs with the words:

“Thank you Meghan for your courage and leadership,” the singer said. “We are all strengthened and inspired by you.”

Beyoncé and Meghan first met in person in July 2019 during the London premiere of The Lion King. According to People sources, the two looked to have a “familiarity” with one another, so much so that spectators were surprised that the two had only actually met. During their meeting, the musician was allegedly heard saying to the duchess, “My princess.”

Beyoncé wasn’t the only superstar who lent her support to Meghan’s milestone birthday. Meghan recruited the help of Melissa McCarthy to introduce 40×40, “a global effort encouraging people around the world to commit to giving 40 minutes of their time to support women going back to work,” according to her office.

“In reflecting on my 40th birthday and the many things I am grateful for, I’m struck that TIME IS AMONG OUR GREATEST AND MOST ESSENTIAL GIFTS: Time with our loved ones, time doing the things we love, time spent learning, laughing, growing, and the sacred time we have on this earth. Amongst the most valuable gifts of time is also time spent in service to others knowing that it can contribute to incredible change. To that last point, and with my 40th lap around the sun in mind, it made me wonder: what would happen if we all committed 40 minutes to helping someone else or to mentoring someone in need? And then what would happen if we asked our friends to do the same?” Meghan wrote on her and Harry’s Archewell Foundation website.

Adele, poet Amanda Gorman, Sophie Gregoire Trudeau, the wife of Canadian Prime Minister Justin Trudeau, and fashion designer Stella McCartney are among others who have shown interest in participating.