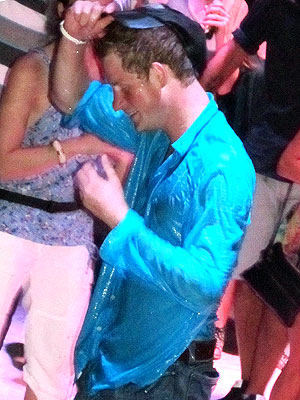 Prince Harry, 26, was dancing poolside at the Veneranda Club on Croatia’s fashionable Hvar island when he lost his footing and jumped right in. He was dressed in a matching blue hat, long-sleeved shirt, and pants.

NBC’s Neil Sean said, “Any girl looking at that sort of footage would think, ‘Do I really want to marry somebody who’s such a bad dancer?'”

An eyewitness told the London Sun, “Harry’s dancing wasn’t great. In fact it was embarrassing.”

He dragged himself out of the club, laughing, and danced barefoot on the side to the ear-splitting blasts of house music while fellow clubbers applauded. Later, Harry was seen in a pub wearing a borrowed white T-shirt and a wet shirt wrapped around his waist.

“Harry was dancing around with his arms in the air. He was having a great time and seemed pretty tipsy,” the British Sun tabloid quotes an onlooker as saying. “Suddenly he just jumped into the pool and one of his friends jumped in after him. Everyone thought it was really funny and Harry was laughing his head off. He was soaked to the skin but he didn’t care. He loved being the center of attention.”

The prince took an EasyJet trip to Croatia with a group of pals for a short holiday. He’s thought to be living on a boat near the beautiful island of Hvar, where he went to the Veneranda nightclub on Saturday night.

Damjan Tadic, a local photographer, was also in the nightclub and tried to shoot the partying royal.

He said: “That was the start of an absolutely crazy night. When I got there, he was drinking beer. I asked him if he could put it down so I could take a picture of him with the church in the background so everybody can see he was in Hvar, but he refused. His bodyguards came up to me, and one of them even offered me 20 euros to back off.

“When Prince Harry realised I was not going to give up on him, he said to me ‘let’s have a drink, and then you’ll leave me alone’.”

“He went to the bar and ordered two double vodkas and two double whiskies for the two of us. As soon as the waiter brought us the drinks, he drank it all – first the double vodka then the whisky,” the shutterbug said. “He immediately ordered the same again. We drank those again, in the same manner.

“I insisted on paying for the first round. He paid for the second one. Then he said: ‘Now you can say you drank with the prince.'” Harry’s five bodyguards requested Tadic to leave the venue after he completed his drinks. They were dressed casually so as not to draw notice to themselves.

The nightclub can accommodate up to 1,000 people and features both an outdoor dance floor with a pool and a more typical interior club. There is also a 200-seat VIP section, which Harry chose to forgo in favor of dancing beneath the stars with other partygoers outside.

The prince, who refused VIP treatment, continued to approach tables of females but was unsuccessful until they realized who he was.

“When the girls realized who he was they started dancing and flirting with him,” Sanja Britt Jusic, the club’s manager, told the Mirror. “He was kissing lots of them, but not on the lips.”

This is the prince’s second vacation of the summer. He spent a week on the island of Majorca earlier this month with his good buddy Jake, Warren, and his family in a luxurious home.

When Fox News Mistakenly used Kamala Harris photo in Story About Registered Sex Offender
Meghan Markle ‘doesn’t like being told she’s not the only powerful woman,’ her ego was left ‘raging’