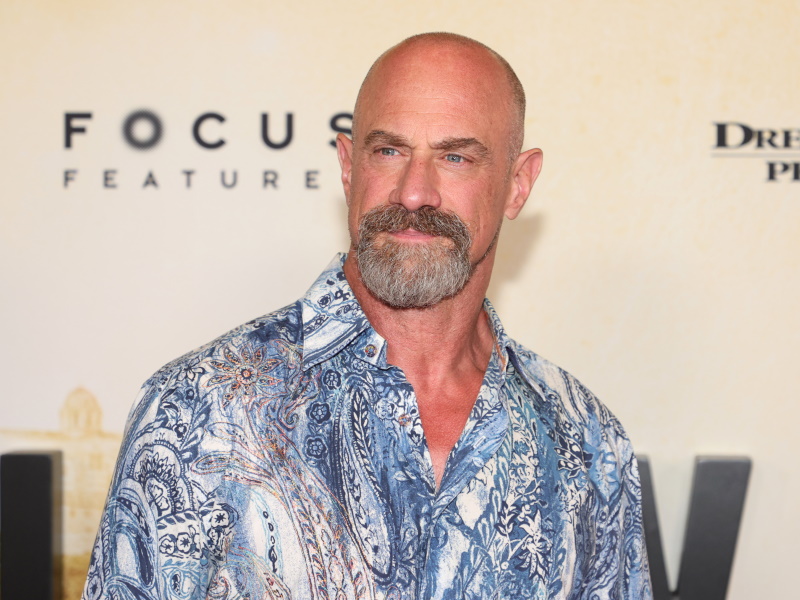 It’s nice to see an older man on the front cover of Men’s Health, and it’s always lovely to see stripped-down images of actor Christopher Meloni!

Inside the magazine, the 60-year-old Law & Order: Organized Crime star can be seen tugging an antique vehicle, doing squats, and posing naked except for a strategically placed weight.

He also addresses his posterior’s “cultural moment,” saying that he never expected to be on the cover of Men’s Health at his age.

He stands full frontal on the cover, with a huge weight covering his genitalia.

Inside is a lengthy conversation in which he discusses everything from his difficult childhood to what it means to be a “zaddy.” If that isn’t enough to entice you, there’s also a video showing him tearing his tank top off, doing the splits, and reclining in a revealing pair of Armani trunks.

On social media, he discussed his butt and physique being the focus of attention, adding, “it’s cool as sh*t. The aspect of age comes into play as far as the cover of [this magazine] and how I feel about it. A friend of mine said, ‘Did you ever think in a million years you’d be on the cover of Men’s Health?’ I said, ‘Certainly not at age 60.’”

The actor’s rear end is so popular, according to Marie Heller, director of Diary Of A Teenage Girl, that fans demand photographs of it. “There was a moment when we were filming and this fan came up to him and asked to take a picture of his butt,. He posed in a funny way, then turned to me with this sly smile and said, ‘There’s kind of a thing about my butt. People are really into it,’” she recounted.

Other photos show him jokingly posing in front of gym equipment, his biceps bulging as he smiles at the camera.

Matt Pietrantonio, his trainer, is introduced in the accompanying exercise video.

In the issue, he explains why his talks for Law & Order: SVU fell through, causing him to depart the show. “My thought was: Instead of 22 episodes, bring me back for nine episodes, or bring me back for 18 episodes. They literally came to me on a Thursday night and said, ‘This is the deal. We want the answer by tomorrow. It’s our way or no way.’ I don’t want to f*ck around with you guys. This is what I want. If you can’t do it, that’s fine. Let’s figure out my exit.”

After a candid on-set selfie generated quite a stir in April, the uber-fit actor declared 2021 his year.

Meloni is well-known for his muscular ass, and he even quips in an interview, “I catch flies with my ass cheeks, like a Venus flytrap.”