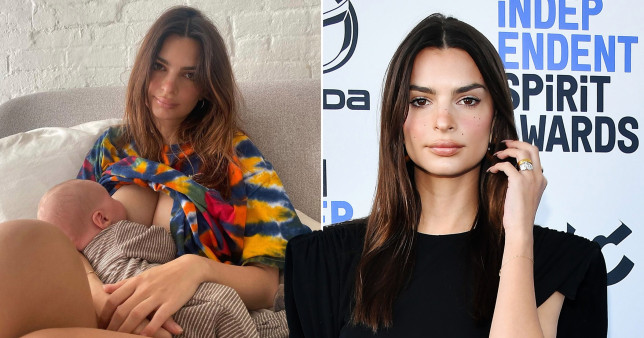 The new mom and her husband, Sebastian Bear-McClard, had their baby Sylvester Apollo in May, and she’s already opening up about breastfeeding. Ratajkowski took to Instagram to share a couple of lovely photos of herself nursing baby Sylvester, or “Sly,” as she refers to him.

‘If it seems like I’m always breastfeeding it’s because I am,’ she told her followers.

Emily looked to have her eyes closed while feeding the baby in one of the photos, making the new mom appear tired. Emily was gazing at the camera with a half-smile in the other image, as if she was ready to get on with her day.

The model insisted that when her kid turns 18, he or she would select their own gender, so she chose the non-binary moniker ‘Sly.’

She wore a tie-dye top and glanced down at the kid she shares with her husband of three years.

Even at a candid breastfeeding session, Ratajkowski has managed to appear effortlessly gorgeous and put together, despite the challenges of feeding and caring for a month-old. We have no question that she is fatigued to the point of exhaustion, yet her natural radiance does not reflect this.

Laura Whitmore was one of the fans who couldn’t get enough of the post, writing in the comments, “I hear ya!”

‘Yes.. that’s basically your life when breastfeeding… all the f*ing time,’ another follower agreed.

“So happy for you,” Paris Hilton said, adding a love emoji.

Ratajkowski’s support for body positivity and personal liberty is one of the many reasons we like and admire her. To say the least, it’s motivating. Despite the inevitable online trolls, Ratajkowski has decided to publish these private photographs for herself, something many parents would naturally be hesitant to do.

She appeared in an Inamorata bikini less than two months after giving birth, revealing her famous body had nearly snapped back to its former shape.

Other followers were eager to give words of encouragement regarding breastfeeding, with one person saying, “They get faster! It’s a full time job…”

‘Such a special time, enjoy every second,’ one said.

‘Girl how can you have that body after the baby?’ commented blogger Chiara Ferragni.

Another user commented, “Such a special time, enjoy every second.” And a third fan wrote, “he is so big and he needs a lot of milk obviously [smiling emojis] you doing great, mama.”

Emily has previously mentioned feeding Sly on social media, posting a photo of herself staring at her baby on March 24. She captioned that one, “Beautiful boy.”