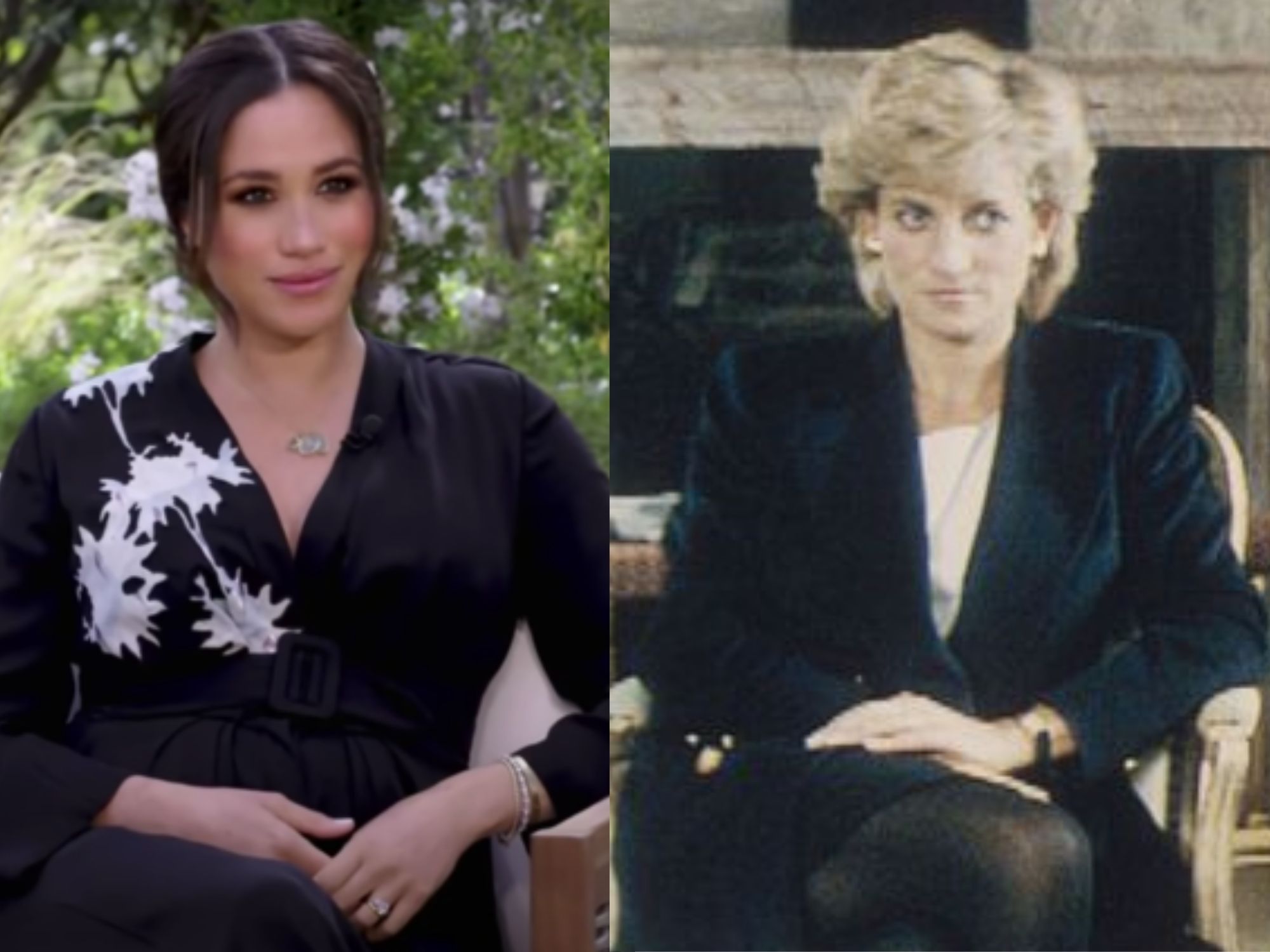 Meghan Markle and Prince Harry’s explosive interview with Oprah Winfrey may have made headlines this week, but they aren’t the first to expose everything to the press.

Prince Diana, Harry’s late mum, was the first royal to go rogue, in her own tell-all interview in 1995. And there are some striking similarities between the two cases, according to viewers.

Princess Diana rocked the world 26 years ago when she sat down with Martin Bashir of the BBC for her famous Panorama interview. The lengthy discussion flouted royal etiquette and uncovered some startling facts about the monarchy – sound familiar?

During the interview, the People’s Princess explored a number of subjects, including how stressful her royal job was, her harrowing mental health problems, and the media’s pressure on her – all of which Meghan tackled in her own tell-all interview.

The princess’ interview revealed some big surprises, including her controversial quote about Charles’ friendship with Camilla Parker Bowles, “there were three of us in this marriage,” and insight into her experiences with depression and bulimia in her marriage. The palace’s “concerns and conversations about how dark [their son Archie’s] skin could be when he’s born” and Markle’s suicidal feelings while pregnant with Archie were both revealed in Prince Harry and Markle’s interview, which contributed to their decision to move aside.

The tell-all interviews of Meghan Markle and Princess Diana have some parallels.

Diana struggled with bulimia, which she admitted to Bashir was an issue she couldn’t speak about at the moment. When asked whether she needed support from other members of the royal family, she said,  “No. You have to know that, when you have bulimia, you’re very ashamed of yourself and you hate yourself, so—and people think you’re wasting food—so you don’t discuss it with people.”

When asked if he told any members of his family about Meghan’s decision to end her life, Harry told Oprah, “No. That’s just not a conversation that would be had.” When asked why, he responded, “I guess I was ashamed of admitting it to them. And I don’t know whether they’ve had the same—whether they’ve had the same feelings or thoughts, I have no idea. It’s a very trapping environment that a lot of them are stuck in… I didn’t have anyone to turn to. I didn’t know where to turn.”

Diana started to purposefully hurt herself when struggling with her fits of grief in an effort to “cope with the stresses” of royal life. “Maybe I was the first person ever to be in this family who ever had a depression or was ever openly tearful,” she said, adding that she got a lot of support from the media but not so much from other royal family members. She also struggled with bulimia, bingeing and purging food as a way to cope with her personal issues. “I was crying out for help, but giving the wrong signals,” she recalled. “When no one listens to you, or you feel no one’s listening to you, all sorts of things start to happen.”

Meghan admitted during her dramatic sit-down that she had struggled with “very straightforward” and “methodical” thoughts of suicide, but that she had been turned down by The Firm as she sought support. ” said that I’ve never felt this way before, and I need to go somewhere,” she recalled. “I was told that I couldn’t [and] that it wouldn’t be good for the institution. … I remember this conversation like it was yesterday, because they said, ‘My heart goes out to you, because I see how bad it is, but there’s nothing we can do to protect you.’

The significance of Australia tour

“My grandmother has been amazing throughout. You know, my father, my brother, Kate, and all the rest of the family, they were [supportive]. They were really welcoming. But it really changed after the Australia tour, after our South Pacific tour,” Prince Harry said in the tell-all interview with Oprah.

“That’s when we announced we were pregnant with Archie. That was our first tour,” Markle added.

Diana: “We had a six-week tour — four weeks in Australia and two weeks in New Zealand — and by the end, when we flew back from New Zealand, I was a different person,” Princess Diana said.

Diana: “Maybe I was the first person ever to be in this family who ever had depression or was ever openly tearful. And obviously, that was daunting, because if you’ve never seen it before how do you support it?” Diana said. “Well, it gave everybody a wonderful new label – Diana’s unstable and Diana’s mentally unbalanced. And unfortunately, that seems to have stuck on and off over the years.”

She continued, “When no one listens to you, or you feel no one’s listening to you, all sorts of things start to happen. For instance, you have so much pain inside yourself that you try and hurt yourself on the outside because you want help, but it’s the wrong help you’re asking for. People see it as crying wolf or attention-seeking, and they think because you’re in the media all the time you’ve got enough attention, inverted commas. But I was actually crying out because I wanted to get better in order to go forward and continue my duty and my role as wife, mother, Princess of Wales. So yes, I did inflict upon myself. I didn’t like myself, I was ashamed because I couldn’t cope with the pressures.”

Meghan: “Look, I was really ashamed to say it at the time and ashamed to have to admit it, to Harry especially, because I know how much loss he’s suffered. But I knew that if I didn’t say it that I would do it – and I just didn’t want to be alive anymore. And that was a very clear and real and frightening constant thought,” she admitted. “I went to one of the most senior people to get help. I share this because there are so many people who . . . are afraid to voice that they need help, and I know personally how hard it is to not just voice it, but when you voice it, say no . . . [Going to a hospital] is what I was asking to do. You can’t just do that, I couldn’t call an Uber to the palace, you couldn’t just go.”

Meghan: “I would sit up at night, and I was just — I don’t understand how all of this is being churned out — and again I wasn’t seeing it — but it’s almost worse when you feel it through the expression of my mom or my friends or them calling me crying like, ‘Meg, they’re not protecting you.’ And I realized it was all happening just because I was breathing.”

Diana: “The most daunting aspect was the media attention, because my husband and I, we were told when we got engaged that the media would go quietly, and it didn’t; and then when we were married they said it would go quietly and it didn’t. Then it started to focus very much on me, and I seemed to be on the front of a newspaper every single day, which is an isolating experience, and the higher the media put you, place you, is the bigger the drop.”

Both women admitted they struggled with self-harm: Meghan had suicidal thoughts. (“I just didn’t see a solution,” she said.) Diana, meanwhile, suffered from postpartum depression and cut herself. (“You felt misunderstood and just very, very low in yourself.”) Both felt woefully unsupported: “I was the first person ever to be in this family who ever had a depression or was ever openly tearful. And obviously that was daunting, because if you’ve never seen it before, how do you support it?” said Diana. “When no one listens to you, or you feel no one’s listening to you, all sorts of things start to happen.” Meghan asked to seek treatment, but she says she was told it wasn’t a feasible option.

On deciding to leave the Royal family

Meghan: “We never left the family. We were saying, ‘OK, if this isn’t working for everyone, we’re in a lot of pain, you can’t provide us with the help that we need, we can just take a step back. We can do it in a commonwealth country.’ We suggested New Zealand, South Africa.”

Diana: “The pressure was intolerable then, and my job, my work was being affected. I wanted to give 110 percent to my work, and I could only give 50. I was constantly tired, exhausted, because the pressure was just, it was so cruel. So I thought the only way to do it was to stand up and make a speech and extract myself before I started disappointing and not carrying out my work. It was my decision to make that speech because I owed it to the public to say that, you know, ‘Thank you. I’m disappearing for a bit, but I’ll come back.'”

On Why They Finally Chose to Speak Out

Diana: “Maybe people have a better understanding, maybe there’s a lot of women out there who suffer on the same level but in a different environment, who are unable to stand up for themselves because their self-esteem is cut into two.”

Meghan: “As an adult who lived a really independent life to then go into this construct that is different than I think what people expect it to be, it’s really liberating to be able to have the right and the privilege in some ways to be able to say yes, I’m ready to talk.”