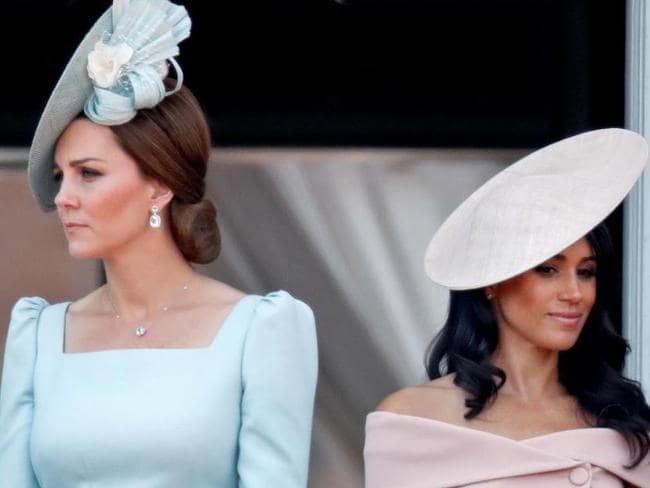 In the aftermath of Meghan’s bombshell interview with Oprah Winfrey, palace sources have revealed that Meghan “slammed the door” in her sister-in-law’s face as she sought to apologize for a dispute stockings.

“Last year, a source informed Tatler that the “problem” with the flower girl dresses arose from “whether the bridesmaids should wear tights or not… Kate, following protocol, thought that they should.  Meghan was adamant that they not do so.”

Prior to the Sussexes’ wedding, news emerged that Meghan Markle had left Kate Middleton in tears after Princess Charlotte’s bridesmaid dress fitting, but the Duchess admitted in an intense interview with Oprah Winfrey that the contrary occurred.

Mr Low, talking to 60 Minutes Australia, said: “The flower girl incident with Kate and who made who cry.

“There was a fitting for the bridesmaids’ dresses, there was a row between Meghan and Kate, and Kate left in tears, as far as I know.

“The next day, Kate went around with roses as a peace offering, but Meghan shut the door in her face.

“Maybe Meghan cried as well, or perhaps they both cried, but it seemed like a score-settling to me.”

Though Meghan claimed to have “forgiven” Kate, several sources told The Times that she “slammed the door in Kate’s face” the next day when the Duchess of Cambridge carried a bouquet of flowers to Nottingham Cottage.

The Duchess of Sussex admitted in an interview with Oprah that Kate caused her cry after her wedding to Harry. According to a source, Prince William is looking out for his wife and has been increasingly protective of her as a result of the accusations.

“William is very protective of Kate and can get very angry. For Meghan to name Kate in a negative light is worse than being attacked himself,  ” People magazine cited a person close to Prince William.

The royals and staff members were loaded with “anger” after the interview, according to the report.