The focus of HBO’s new comedy The Prince is on Meghan Markle and Kate Middleton, as the show mocks their alleged rivalry.

The connection between the sisters-in-law is featured in Family Guy creator Gary Janetti’s latest work.

Royal supporters are already outraged by the upcoming HBO series, claiming that “children are off-limits” for ridicule.

It depicts a fictitious behind-the-scenes life as seen through the eyes of Prince George, an eight-year-old.

The controversial 12-part HBO Max series is a no-holds-barred satirical look at the British royal family’s ins and outs.

Cartoons of Meghan and Kate arguing over FaceTime can be seen in one scene. 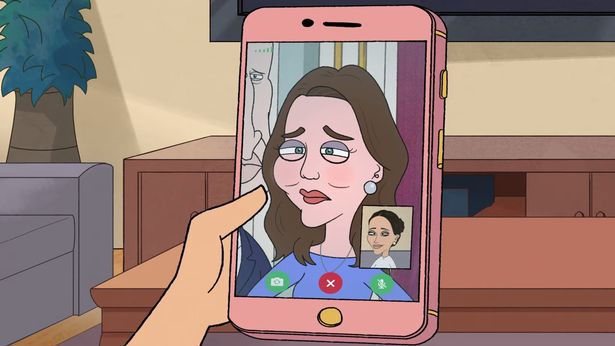 The cartoon isn’t the most flattering of Kate and Meghan
(Image: HBO)

To which Kate, played by Lucy Punch from Motherland, responds, “Meghan?” as she tries to act as if she doesn’t know who’s calling.

“Meghan Markle, your sister-in-law,” she says as Prince Harry enters the room.

“Wonderful darling,” replies Kate as Prince William is heard asking: “Who was that?”

“Meghan. Some t****r gave her our number…” before realising she was still on Facetime to Meghan.

“Oh s**t!” exclaims the cartoon future Queen as she hurries to end the call.

Meghan retorts, “Don’t miss her,” and tosses the phone onto the table. 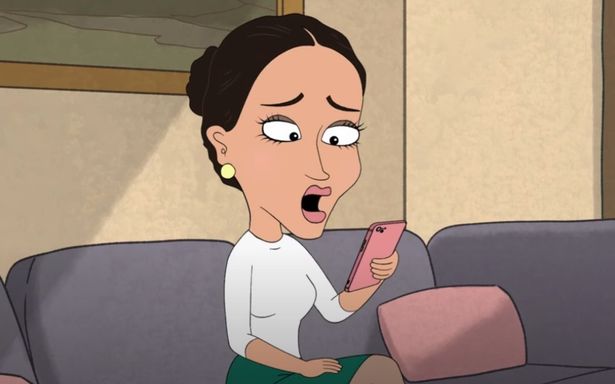 The new series, which is accessible to watch online, also stars Orlando Bloom as Prince Harry and Iwan Rheon from Game of Thrones and Misfits as the Duke of Cambridge.

The scathing cartoon follows reports that Meghan and Kate have been ‘texting’ since the birth of Meghan and Harry’s baby Lilibet.

According to an insider, the two are now on better terms.

“Kate even sent Meghan a gift for the baby. They’re in a better place and have exchanged texts since the birth of Lilbet.”

Their relationship was said to be strained following the shocking Oprah Winfrey interview.

Meghan denied making Kate cry, saying that the reverse transpired during a squabble about bridesmaid gowns.

“The bridesmaids dress incident took place so long ago…. they’ve called a truce,” an insider claimed.

It was supposed to air in May, but it was pushed back due to the death of the Duke of Edinburgh.

Condola Rashad, who starred in Sex and The City 2, plays Meghan Markle.

How Scarlett Johansson and Florence Pugh ‘bonded over a headlock’ for ‘Black Widow’
Meghan Markle could run for US president within the next 10 years, backed by the Clintons & Obamas, says biographer